Whilst being best known for its range of laptops, Lenovo needed to energise its presence in the desktop market.

Turning to long-term partner Twogether for its development, the 'tiny' creative programme that followed would drive massive gains.

A $43 billion tier-1, global technology brand with 52,000 employees, operating across more than 160 countries, Lenovo was shipping and selling more PCs worldwide than any other manufacturer.

However, in the desktop market, Lenovo suddenly found itself needing to tackle new customer wants, PC product categories, and demand evolving markedly. The Lenovo ThinkCentre Tiny series met customer demands perfectly. So what it needed was a big push.

This called for a singular focused, disruptive yet fun campaign that would engage, inform, and enthuse two key audiences: target end-users and its own internal sales team.

Engaging with the first – subject to constant streams of marketing – demanded something with an instant impact; the second an equally potent and memorable conversation opener. Both however, needed bringing up to speed on the USPs of Lenovo's ThinkCentre Tiny series – and in a way that would actively drive pipeline and sales volumes.

"Tiny. It's the new big." was the high-performing outcome. 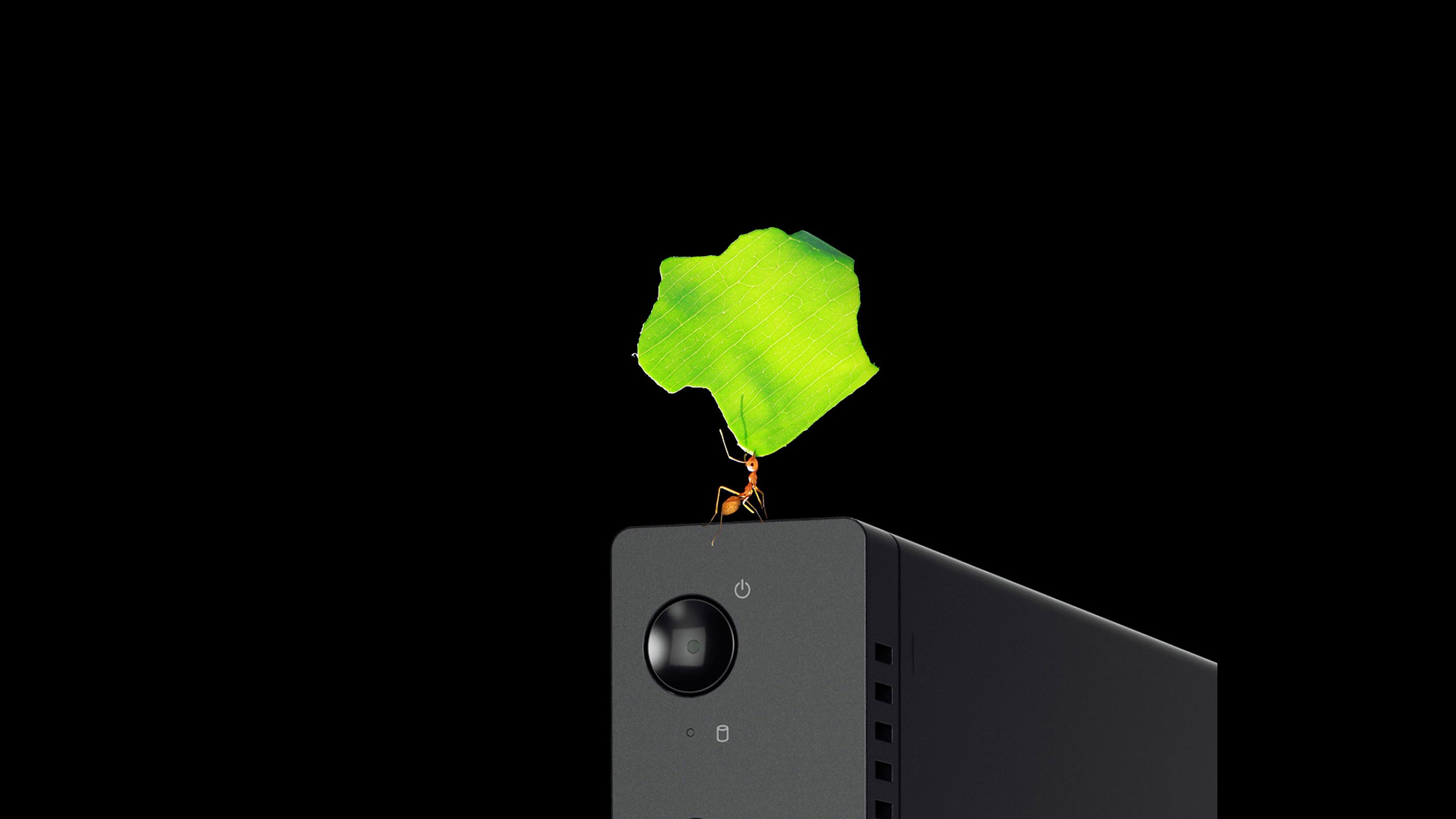 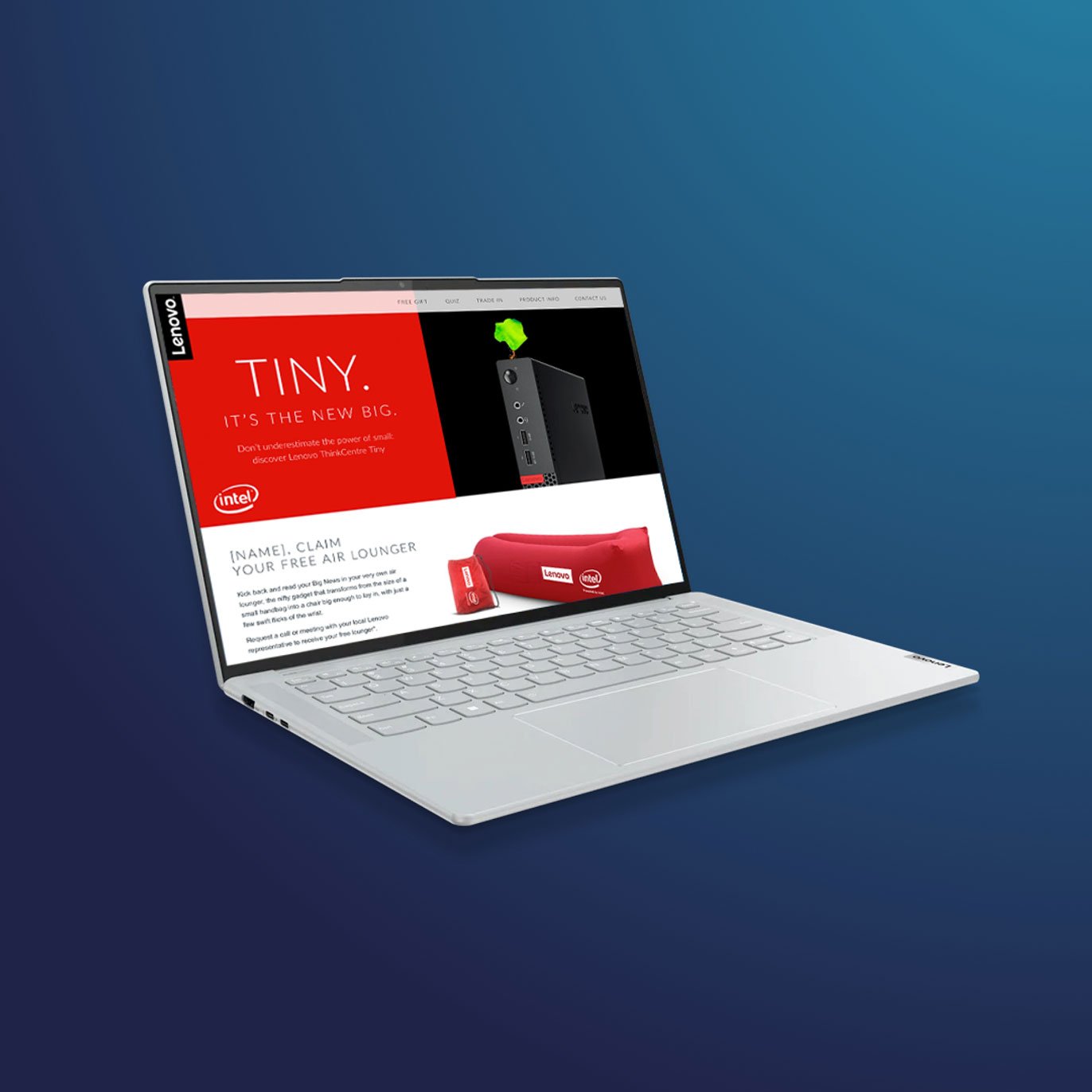 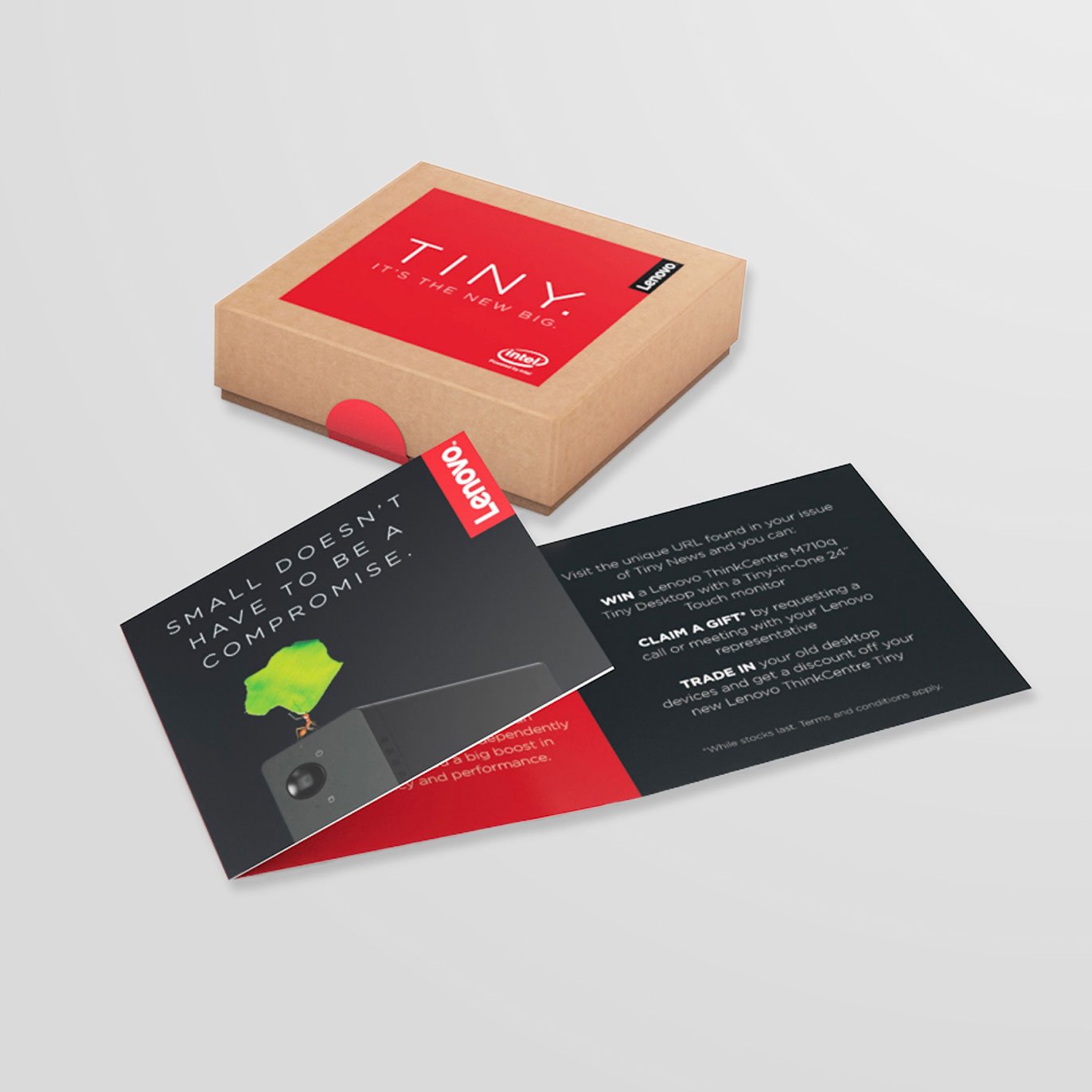 Bigging up the USPs

Lenovo's ThinkCentre Tiny Series of desktops came with something comparatively rare in the commodified world of B2B tech: genuinely differentiated, compelling benefits – and that gave us a real edge.

Redramatising and differentiating Lenovo's brand and offering, and mirroring the success of our earlier, award-nominated "Tiny Not Timid" campaign, the new treatment highlighted how the Tiny range packed power and performance disproportionate to their size.

Employing paradox as a quick, easily understood attention grabber, and unlocking a host of campaign execution ideas while driving home the products' core benefit, "Tiny. It's the new big." was conceived. 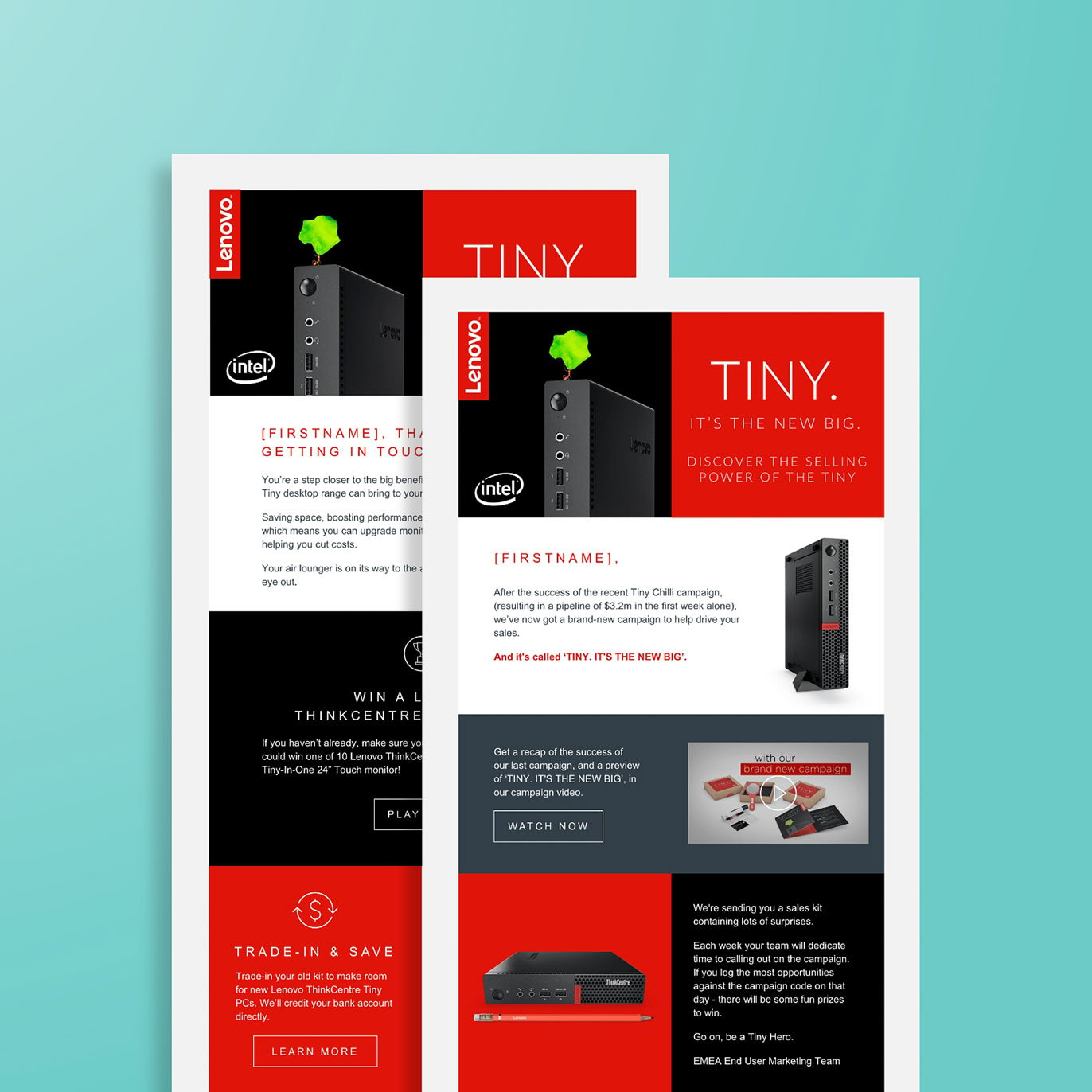 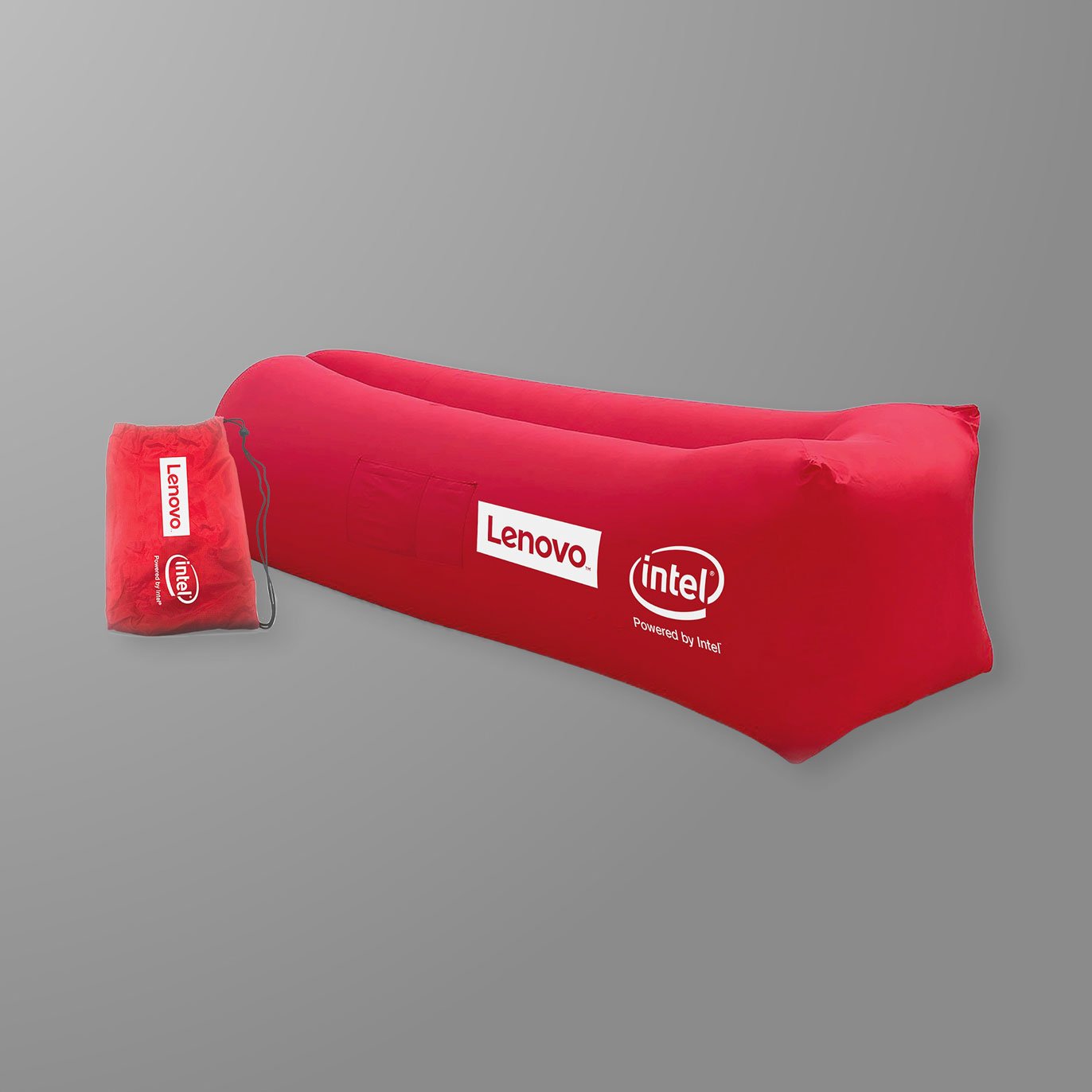 Direct and impactful, the message quickly proved highly versatile too, adapting easily to a range of media channels, content, campaign assets, and executions.

This included a variety of quirky incentives and gifts – a tiny newspaper and magnifying glass, a full-sized inflatable lounger in a tiny pack – plus the chance for users to win a Tiny desktop of their own.

Giving both Lenovo's brand and its offerings a fresh momentum in what is one of the company's most important product categories, the campaign delivered all that was expected of it, including:

Twogether’s work on the ‘Tiny’ project typified the calibre of commercially relevant creativity we can always trust them to deliver.

Simple, impactful, effective, and efficiently executed, this campaign delivered precisely what was called for: great results that helped Lenovo to win back mind- and market share and compete more effectively against our key rivals in the PC space.

Best use
of direct mail

The so-called metaverse. For something that has precisely nothing to with Doctor Strange, the...

Join host Jon Busby, and guests Debbie Clarke and Alex Tanner for the first part of this...

Over the last couple of years, there's been a shift in marketing's approach to demand gen. With so...